A socket connection between the API client application and TWS is established with the LYNXApi.EClientSocket.eConnect function. TWS acts as a server to receive requests from the API application (the client) and responds by taking appropriate actions. The first step is for the API client to initiate a connection to TWS on a socket port where TWS is already listening. It is possible to have multiple TWS instances running on the same computer if each is configured with a different API socket port number. Also, each TWS session can receive up to 32 different client applications simultaneously. The client ID field specified in the API connection is used to distinguish different API clients.

Once our two main objects have been created, EWrapper and ESocketClient, the client application can connect via the LYNXApi.EClientSocket object:

eConnect starts by requesting from the operating system that a TCP socket be opened to the specified IP address and socket port. If the socket cannot be opened, the operating system (not TWS) returns an error which is received by the API client as error code 502 to LYNXApi.EWrapper.error (Note: since this error is not generated by TWS it is not captured in TWS log files). Most commonly error 502 will indicate that TWS is not running with the API enabled, or it is listening for connections on a different socket port. If connecting across a network, the error can also occur if there is a firewall or antivirus program blocking connections, or if the router's IP address is not listed in the "Trusted IPs" in TWS.

After the socket has been opened, there must be an initial handshake in which information is exchanged about the highest version supported by TWS and the API. This is important because API messages can have different lengths and fields in different versions and it is necessary to have a version number to interpret received messages correctly.

After the highest version number which can be used for communication is established, TWS will return certain pieces of data that correspond specifically to the logged-in TWS user's session. This includes (1) the account number(s) accessible in this TWS session, (2) the next valid order identifier (ID), and (3) the time of connection. In the most common mode of operation the EClient.AsyncEConnect field is set to false and the initial handshake is taken to completion immediately after the socket connection is established. TWS will then immediately provides the API client with this information.

[!WARNING] The LYNXApi.EWrapper.nextValidID callback is commonly used to indicate that the connection is completed and other messages can be sent from the API client to TWS. There is the possibility that function calls made prior to this time could be dropped by TWS.

There is an alternative, deprecated mode of connection used in special cases in which the variable AsyncEconnect is set to true, and the call to startAPI is only called from the connectAck() function. All LYNX samples use the mode AsyncEconnect = False.

API programs always have at least two threads of execution. One thread is used for sending messages to TWS, and another thread is used for reading returned messages. The second thread uses the API EReader class to read from the socket and add messages to a queue. Everytime a new message is added to the message queue, a notification flag is triggered to let other threads now that there is a message waiting to be processed. In the two-thread design of an API program, the message queue is also processed by the first thread. In a three-thread design, an additional thread is created to perform this task. The thread responsible for the message queue will decode messages and invoke the appropriate functions in EWrapper. The two-threaded design is used in the LYNX Python sample Program.py and the C++ sample TestCppClient, while the 'Testbed' samples in the other languages use a three-threaded design. Commonly in a Python asynchronous network application, the asyncio module will be used to create a more sequential looking code design.

The class which has functionality for reading and parsing raw messages from TWS is the LYNXApi.EReader class.

In Python LYNX API, the code below is included in Client::connect(), so the EReader thread is automatically started upon connection. There is no need for user to start the reader.

Now it is time to revisit the role of LYNXApi.EReaderSignal initially introduced in The EClientSocket Class. As mentioned in the previous paragraph, after the EReader thread places a message in the queue, a notification is issued to make known that a message is ready for processing. In the (C++, C#/.NET, Java) APIs, this is done via the LYNXApi.EReaderSignal object we initiated within the LYNXApi.EWrapper's implementer. In the Python API, it is handled automatically by the Queue class.

LYNX Gateway by contrast will not make connections to market data farms until a request is made by the LYNX client. Until this time the connection indicator in the LYNX Gateway GUI will show a yellow color of 'inactive' rather than an 'active' green indication.

When initially making requests from an API application it is important that the verifies that a response is received rather than proceeding assuming that the network connection is ok and the subscription request (portfolio updates, account information, etc) was made successfully.

Accepting an API connection from TWS

For security reasons, by default the API is not configured to automatically accept connection requests from API applications. After a connection attempt, a dialogue will appear in TWS asking the user to manually confirm that a connection can be made: 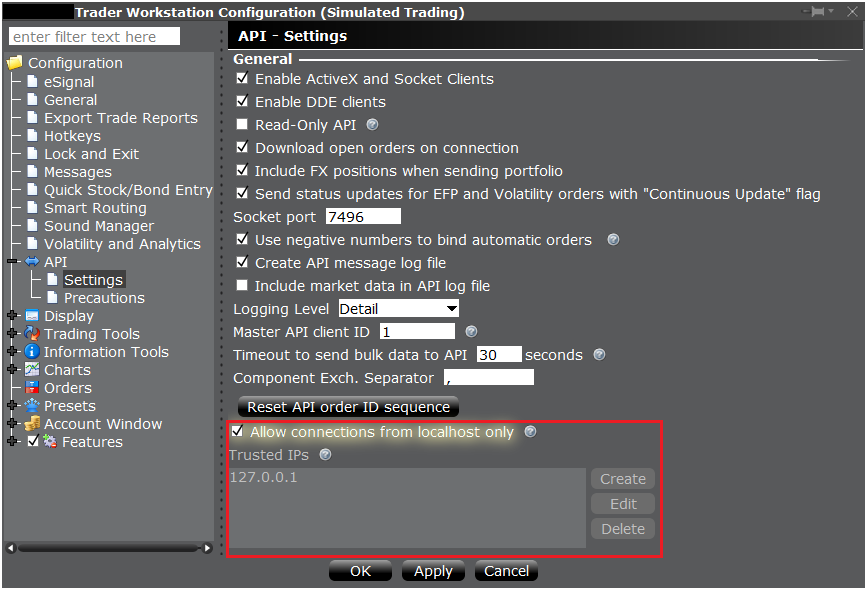 In rare cases in which LYNX Gateway or TWS has a momentarily delay in establishing connecting to the LYNX servers, messages sent immediately after receiving the nextValidId could be dropped and would need to be resent. If the API client has not receive the expected callbacks from issued requests, it should not proceed assuming the connection is ok.

If there is a problem with the socket connection between TWS and the API client, for instance if TWS suddenly closes, this will trigger an exception in the EReader thread which is reading from the socket. This exception will also occur if an API client attempts to connect with a client ID that is already in use.

The socket EOF is handled slightly differently in different API languages. For instance in Java, it is caught and sent to the client application to LYNXApi.EWrapper.error with errorCode 507: "Bad Message". In C# it is caught and sent to LYNXApi.EWrapper.error with errorCode -1. The client application needs to handle this error message and use it to indicate that an exception has been thrown in the socket connection. Associated functions such as LYNXApi.EWrapper.connectionClosed and LYNXApi.EClient.IsConnected functions are not called automatically by the API code but need to be handled at the API client-level*.